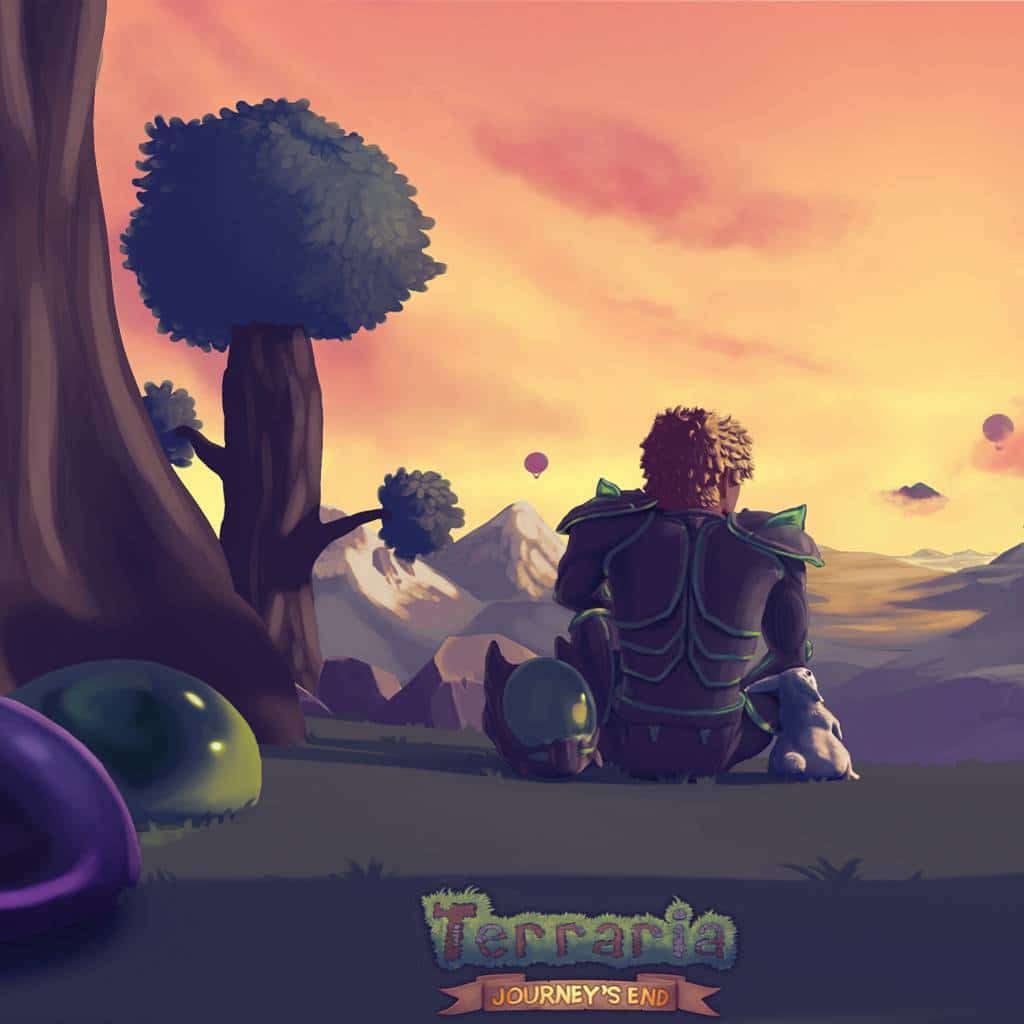 Let’s start and make it very clear that there is no single way to progress and play Terraria. The progress, the order of the bosses, and weapon recommendation here is what I feel will give beginners the smoothest experience for their first playthrough. However, you can choose a different weapon entirely, if you want. The world of Terraria is in your hands. Let’s jump right in with this Terraria bosses order guide.

First, cut some trees and build a house. Houses have to be at least 60 blocks, including the sides and the floor. Make sure it’s fully walled, has a table, chair, and a torch. No NPC will move in if you fail to meet one of these requirements.

Use life crystals to increase your maximum health—mine for ores too. You can smelt the metal ores at a furnace and craft at an anvil. Craft your first pickaxe upgrade. I recommend getting ice blocks from the ice biome to craft frostburn arrows and a bow.

The Eye of Cthulhu

The process for spawning and mining for meteorite has changed after the 1.4 update. For a meteorite to generate, you will have to defeat either the Eater of Worlds or the Brain of Cthulhu. Check this video for an easy way of killing Eater of Worlds. Defeating one of these bosses became a new requirement. Once the required boss is defeated, multiple meteors will crash on the map over time.

Down the meteorite crash site, you will see a lot of meteorite. Mining meteorite requires a tungsten pickaxe or better to mine. Silver pickaxes and below will not break the meteorite. After the 1.4 update, you cannot use bombs or TNT to blow up the meteorite.

Also, the meteorite will burn the player if they stand on it. So it is recommended to equip an Obsidian Skull to negate the on-fire debuff. You should have this in stock already. While mining the meteorite, you will encounter a mob called a Meteor Head. These mobs are round, rocky, and fly threw blocks and try to damage you as you mine. It will set you on fire when they touch you. So make sure to avoid them at all costs. When mining, you can move your pickaxe towards the Meteor Head while you mine. Make meteor armor and the space gun.

Defeat Skeletron to get free access to the Dungeon. Queen Bee to get Bees Knees and Beenades, which are very useful for the Wall of Flesh battle.

Make obsidian skin potions and dive into the lava in the underworld. Use the Nightmare Pickaxe to mine hell stone. Make molten armor and the molten pickaxe with hell stone.

Throw the guide voodoo doll in lava and fight the wall of flesh using Beenades or the Bees Knees.

Welcome to hard mode. Obtain the Pwnhammer and break demon altars, three at a time, to spawn hard mode ores. Buy leaf wings from the with doctor in a jungle house at night. Mine cobalt or palladium, depending on which one you get.

Make the pickaxe. Mine mithril or orichalcum depending on which one you have. Make the corresponding anvil to craft hard mode items and the pickaxe too. You can make a repeater as well as your first hard mode weapon, or use the guns from the Wall of Flesh.

My recommendation now is to get dark shards from dark mummies in the corrupted desert, Souls of Night from the underground corruption of crimson, and the shotgun from the arms dealer to make the onyx blaster, the first real hard mode upgrade. Alternatives include the Ice Sickle or the Amarok, which drops from enemies in the ice biome. Or the Crystal Serpent, which you fish from the underground hollow. With four stacks of 999 arrows or musket balls, you can also craft an unlimited ammo pouch at the crystal ball, which you can buy from the wizard.

Next, with souls of light from the underground hollow, make a key of light and place t in an empty chest to spawn a hollow mimic. These are tough, so do be careful. Obtain the Daedalus Stormbow. It’s a powerful weapon—farm unicorns for the unicorn horn and pixies for Pixie Dust in the hollow biome.

Using the Souls of Might from the Destroyer, Shark Fins from sharks in the ocean, illegal gun parts from the arms dealer at night, and the Mini Shark to craft a Mega Shark, one of the most excellent guns in the game. Craft Ichor or cursed bullets using the loot from the underground corruption or crimson.

Craft the mechanical eye to summon the Twins. Fight them at night using the Mega Shark. I recommend taking down Spazmatism first, which is the green one, because of his flame attack, which is dangerous.

Next, craft the mechanical skull and defeat Skeletron Prime. You can use the Daedalus Stormbow with holy arrows or the Mega Shark.

With all three mechanical bosses defeated, make the pickax. Now you can mine chlorophyte in the jungle. Look for life fruits as well. Increase your maximum health to 500 by using them. Find a Plantera bulb and leave it alone for now. Make some chlorophyte armor if you want. I recommend making chlorophyte bullets, which home in on the target.

Clear a large space using dynamite and build an arena. Break the Plantera bulb to summon and fight Plantera. Using the Mega Shark and chlorophyte bullets should make it a rather easy fight. Just kite around it. When you killed it, you will obtain the temple key. Enter the jungle temple and take on Golem. He’s not too hard, but be careful not to get trapped in a corner.

Explore the Dungeon for ectoplasm – if you’re a mage, you can do this before the Golem to get the specter armor. With ectoplasm, you can make the naughty present or the pumpkin medallion to summon the frost moon and the pumpkin moon, respectively. These events have sweet loot drops, so go ahead if you want to. Use the Daedalus Stormbow with holy arrows. They’re effective. Get a Martian invasion if you’re going to as well. You can slay the Saucer easily by staying underground in a wide enough area, using the Daedalus Stormbow and teleports at either end of the room to avoid the saucers laserbeam quickly.

I also recommend the master ninja gear; it allows you to dash, which helps a lot. I recommend fighting Duke Fishron for the Fishron Wings and the Tsunami Bow. He’s hard, so don’t worry if it takes you many tries. With the UFO mount from the Martian and a tsunami bow and holy arrows, take down the Lunatic Cultist at the dungeon entrance. Once you do, the four space pillars will spawn.

Start by going for the pillar of your preferred weapon type. If you’re a melee user, go for the Solar Pillar. The Vortex Pillar is for ranged users, and magic users go for the Nebula Pillar. Finally, summoners begin assaulted the Stardust Pillar. Once you kill a specific number of enemies, the shield falls, and you can attack the pillar. Loot the fragments. Craft the weapon of your choice at the ancient manipulator from the Lunatic Cultist. Destroy the second and third pillars. Start assaulting the last one only after you’ve prepared for the Moon Lord.

There are many possible ways you can use to beat the Moon Lord, but I prefer using a long road of asphalt blocks. With the last pillar defeated, the Moon Lord will spawn in one minute. I recommend using Ichor Arrows or Cursed Arrows with a Phantasm Bow. Just run along the asphalt with Lightning Boots and stay ahead of the Moon Lord by a little.

To defeat the Moon Lord, you have to kill all three eyes. The two on his hands and the one on his forehead. After that, you can attack and defeat his core. Just stay in front of him, then fly upwards when he’s about to shoot the laser from the middle eye, then dash to the other side and run away.

I recommend taking out all three eyes at once. Because when defeated, the eyes can still attack you. With the eyes gone, attack the core until it’s dead.

Congratulations! You have defeated the final boss of the game. Feel free to do anything you want to do now. The world of Terraria is now in your hands. You can build something. Purify the whole world. Or you can start a new playthrough using a different weapon. The possibilities are endless. You can even try mods if you want to. You can fight the other bosses that we skipped, check out this site for more information on them. Hopefully, this progress and bosses order guide has given you an idea on how to progress through this massive game.

See also:
How to get 26 great pets in Terraria
The Complete Potion Guide for Terraria